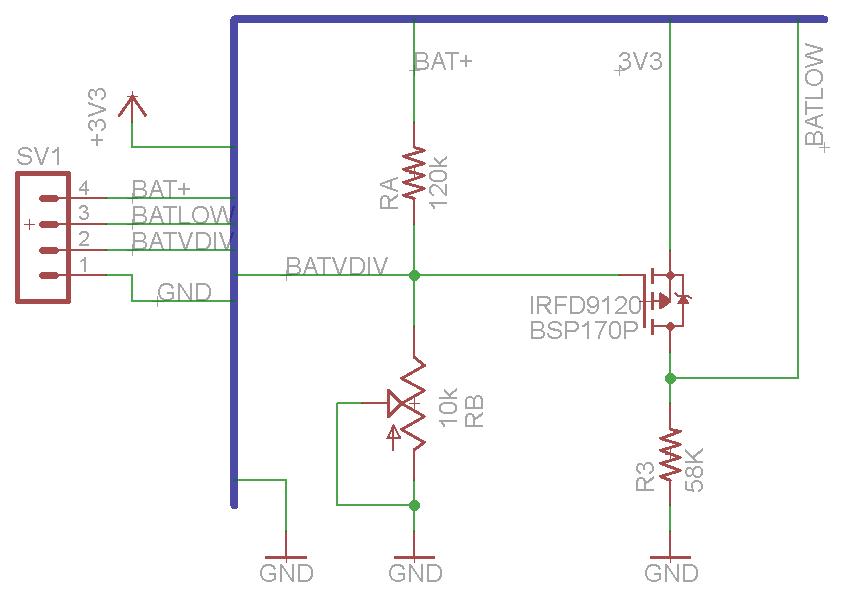 Know when the batteries voltage decrease to 7.0v because after that they cannot support the 7805 and decline rapidly. If we are moving and the batteries stop supplying enough current to the 7805 then the pi will stop responding and remain in whatever state it was in. So if we were going forward we will run into a wall and not stop. I want to make sure I know if the batteries are low and then at least I can stop controlling the unit!

Yes it works pretty well. I’m using two CR123 rechargables and I get about 30 minutes before they start to drop. This circuit will let you know just as they start to drop off. From there you might still have another 5 minutes. I’m going to make the javascript in my control page turn all of the gpio off and disable the buttons when this gets triggered, along with logging the time. This way I will see how much time you have after you get notified.

The 3.3 volts I get are from the pi’s 3.3v output so when the pi eventually does loose power because the 7805 can no longer function the 3.3v disappears. This means the output of the circuit is unknown. But I dont think it really matters at that point because the feedback into the rPi is pointless if its not running. So be sure to do your house keeping first and then ignore its output later.

The P-Channel Mosfet is really not for this application and costs about $1 each. I should get a cheaper mosfet since I’m not driving anything through it. There are some on mouser that cost about 7c such as PMV160UP,215 there are also IC voltage detectors but none of them seem to work right at 7v, and if I need to put in a voltage divider anyway I could just use a mosfet.